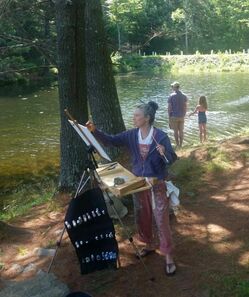 Terri Fraser is a mid-career artist, who attained a Bachelor of Fine Arts degree from Ohio Wesleyan University.  She is a multi-disciplinary artist, who oscillates between oil painting and sculpture.

Terri has been able to commit to her art full time for 8 years.  In that time she has achieved several best in shows and has had her work featured in over 50 shows: solo, group, as well as juried.  In addition to the handful of juried show awards Terri has attained, she has also been featured in the New York Times.
​
Born in Maryland, she grew up in the countryside of New Jersey.  While she has had opportunities to live abroad, in cities and in suburbs, Terri is at her happiest in the country.  She lives among the tall trees at her home and studio in Hunterdon County, New Jersey.
​
​
​
﻿